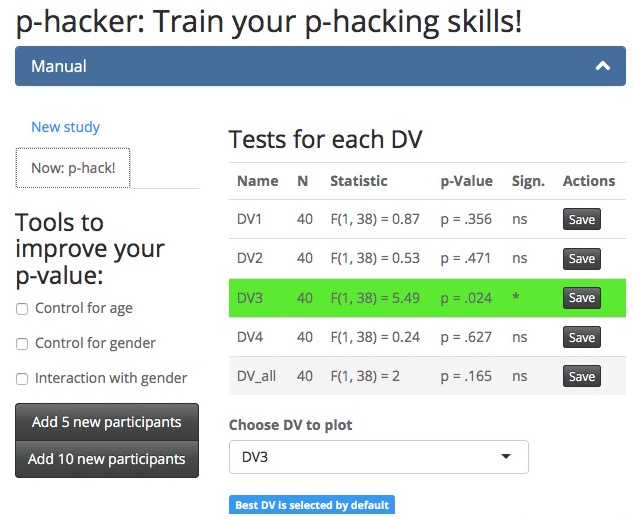 Train your expert p-hacking skills with the interactive p-hacker app! Who gets p<.05 first? 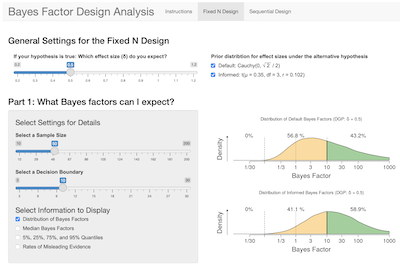 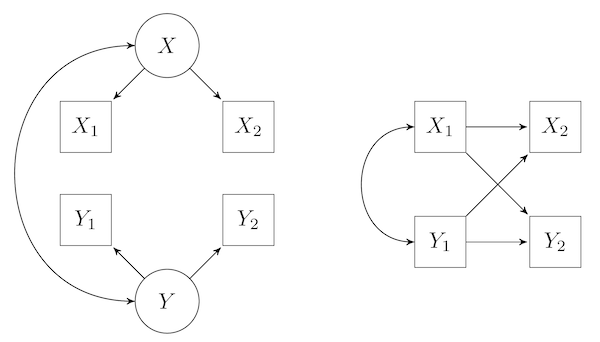 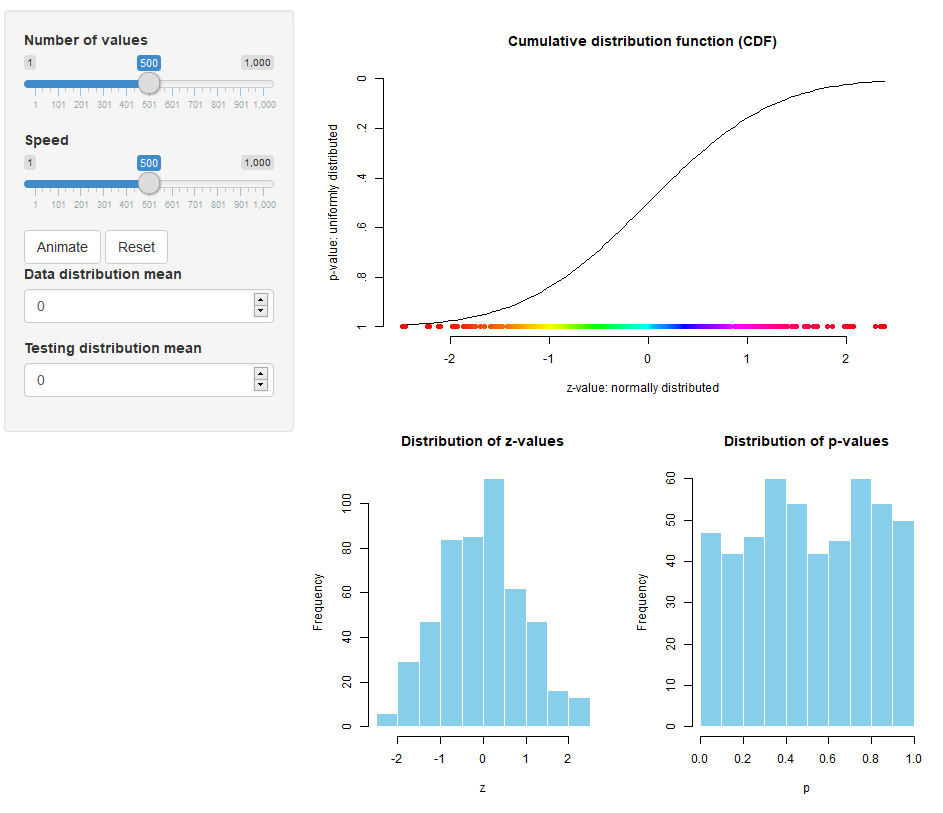 From z to p: A visualization of the link between the two distributions

Ever wondered why p-values are uniformly distributed if the H0 is accurate, even though the data are normally distributed? This animated app visualizes the connection of the two via the CDF and lets you explore the relationship between effect size and skewness of the distribution of p-values. 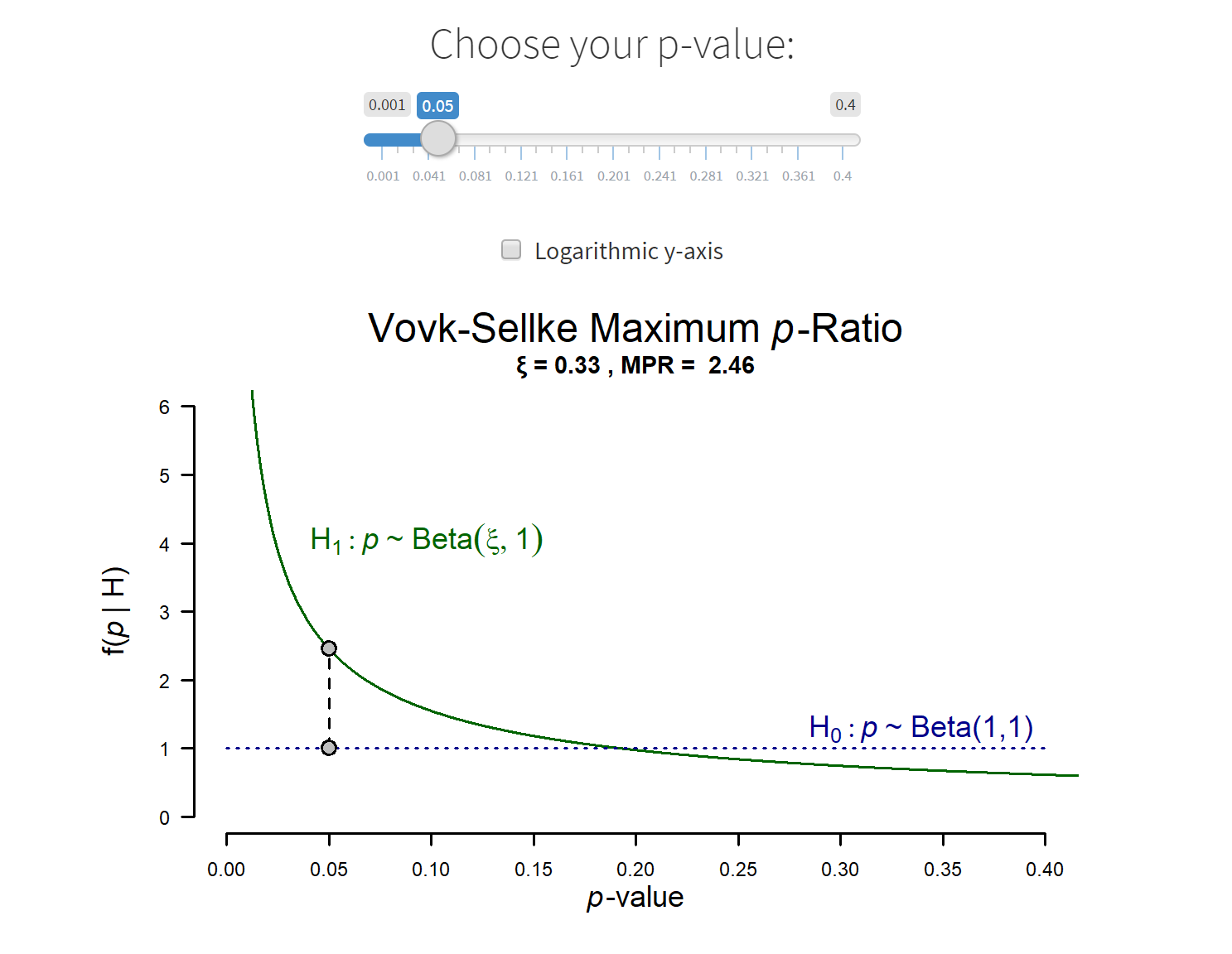 Exploring the diagnosticity of the p-value

Explore the Vovk-Sellke Maximum p-Ratio, a measure that indicates the maximum diagnosticity of a given p-value. Choose your own p-value to find out how diagnostic it is for your research!

Plot the theoretical p-value distribution and power curve for an independent t-test based on the effect size, sample size, and alpha. 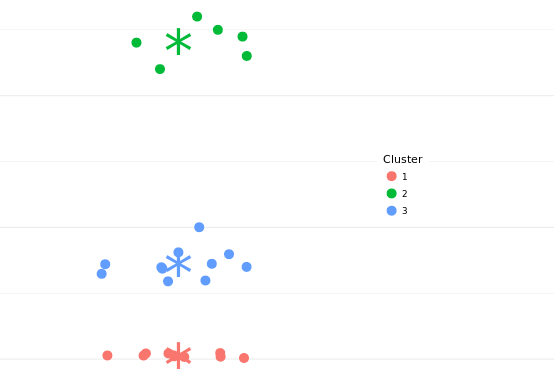 Identify how many clusters your one-dimensional data can be grouped in and how much variance you can explain with these clusters by using the "elbow method". 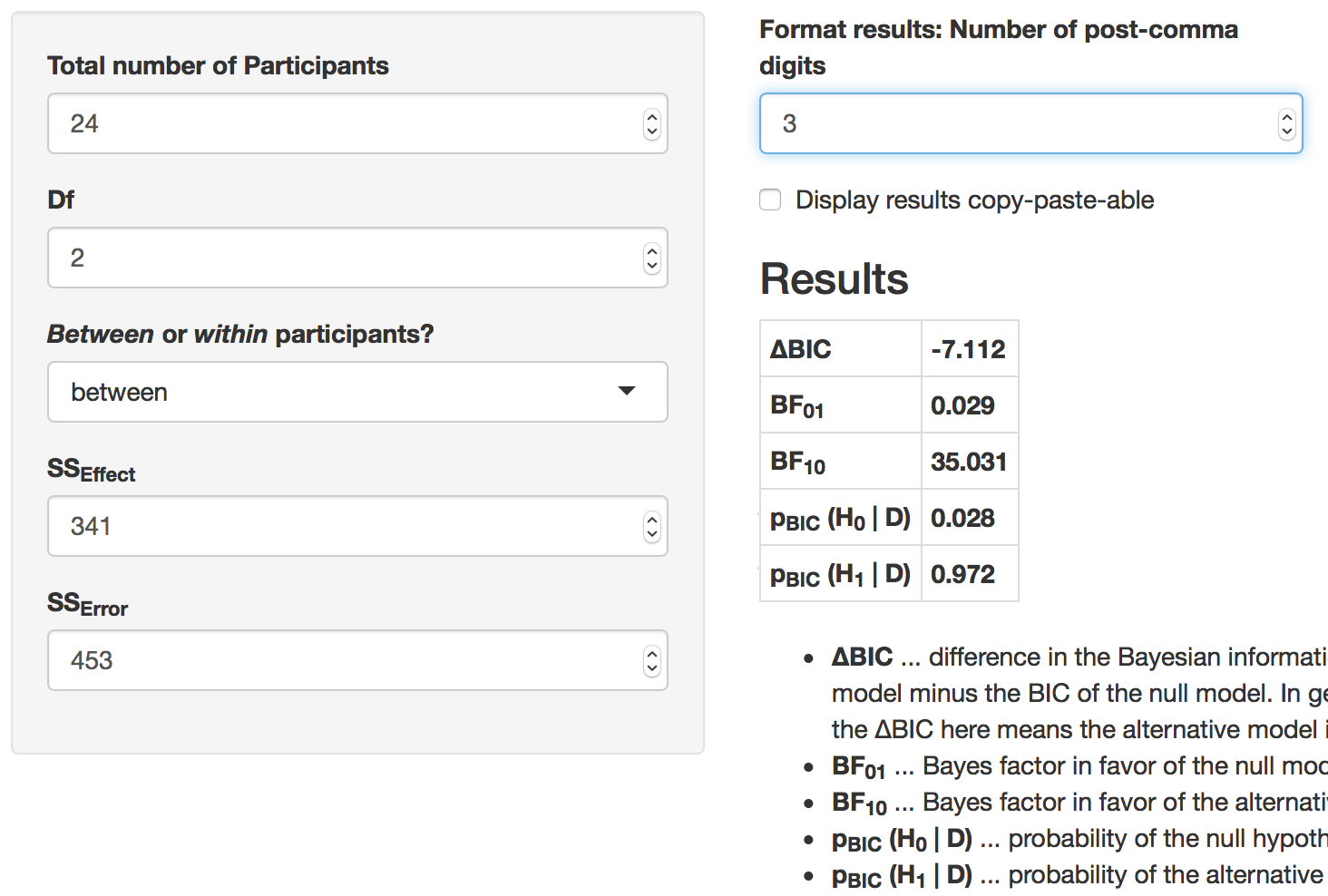 Obtain a Bayesian interpretation of your ANOVA results with this app. You just need to enter your sum of squares and some information about your design. 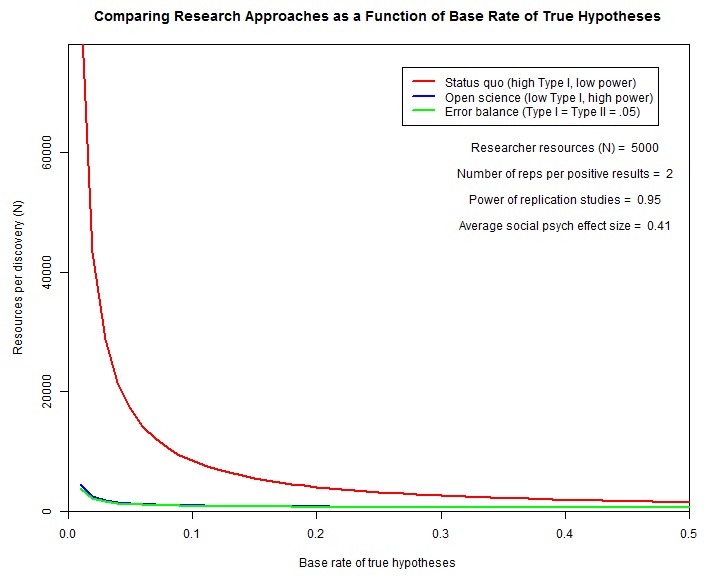 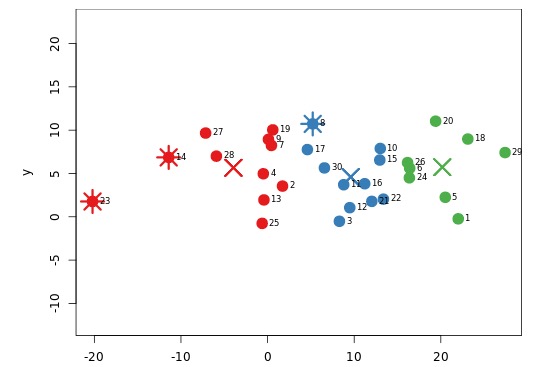 The app allows you to see the trade-offs on various types of outlier/anomaly detection algorithms. Outliers are marked with a star and cluster centers with an X. 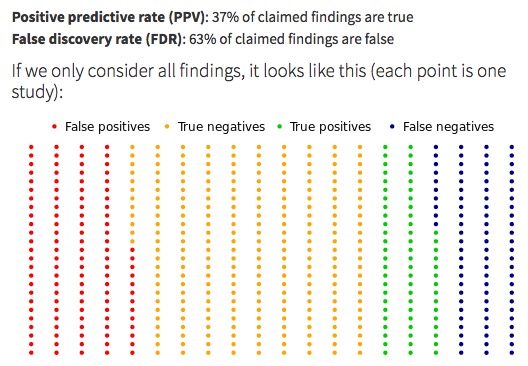 When does a significant p-value indicate a true effect?

by Michael Zehetleitner and Felix Schönbrodt

Understanding the Positive Predictive Value (PPV) of a p-value. 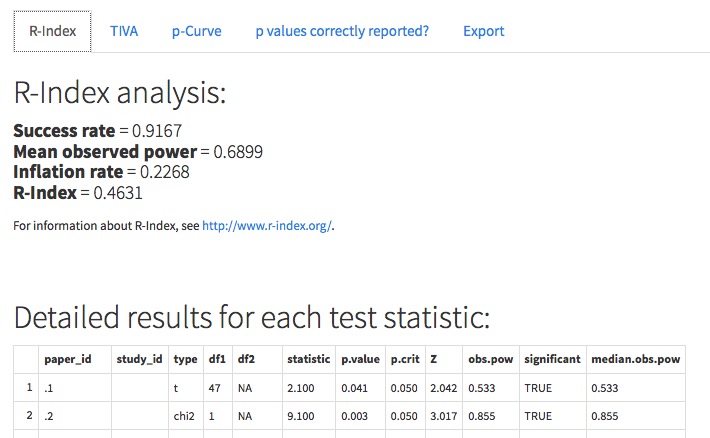 This Shiny app implements the p-curve (Simonsohn, Nelson, & Simmons, 2014; see http://www.p-curve.com) in its previous ("app2") and the current version ("app3"), the R-Index and the Test of Insufficient Variance, TIVA (Schimmack, 2014; see http://www.r-index.org/), and tests whether p values are reported correctly. 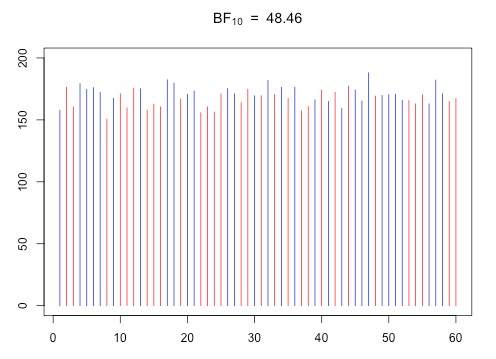 What does a Bayes factor look like? (2) Height difference between males and females.

Can you "see" a group mean difference, just by eyeballing the data? Is your gut feeling aligned to the formal index of evidence, the Bayes factor?

What does a Bayes factor look like? (1) The urn model.

How much is a BF of 3.7? Well, it is "moderate evidence" for an effect - whatever that means. Let's approach the topic a bit more experientially. What does such a BF look like, visually? We take the good old urn model as an example. 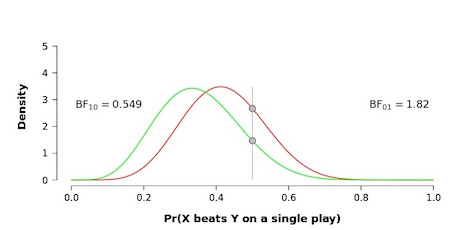 A First Lesson in Bayesian Inference 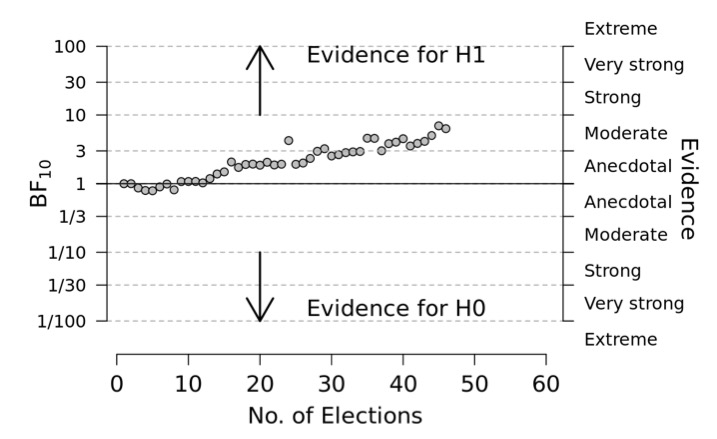 A Compendium of Clean Graphs in R

When done right, graphs can be appealing, informative, and of considerable value to an academic article. This compendium facilitates the creation of good graphs by presenting a set of concrete examples, ranging from the trivial to the advanced. The graphs can all be reproduced and adjusted by copy-pasting code into the R console. 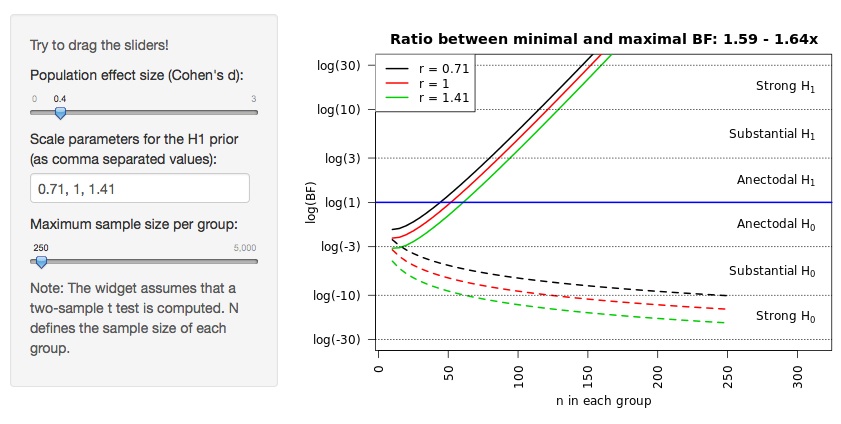 Check how your Bayes factor conclusion depends on the r-scale parameter. 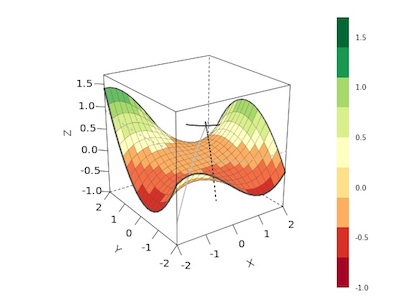 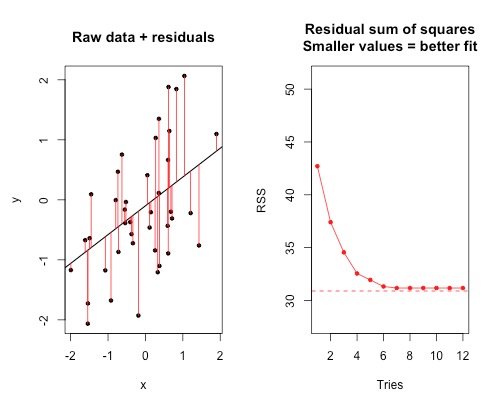 Be an optimizer: Find the best linear fit!

Robustness of Mean and Median

Which is more robust against outliers: Mean or median? 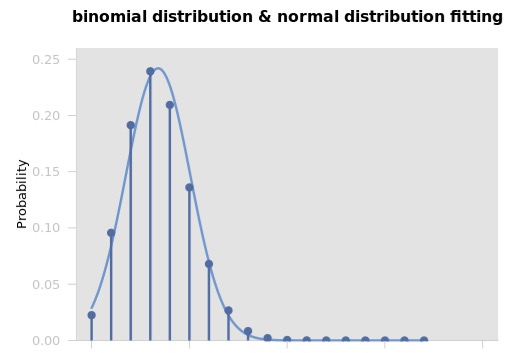 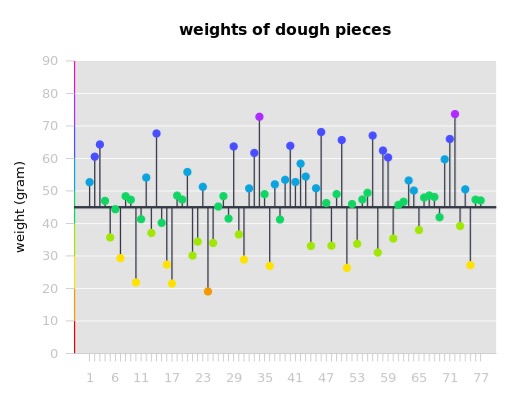 Get acquainted with histograms.